NEWARK, N.J., Oct. 6, 2021 /PRNewswire/ — The virtual red carpet is ready to welcome some of New Jersey’s best and brightest! 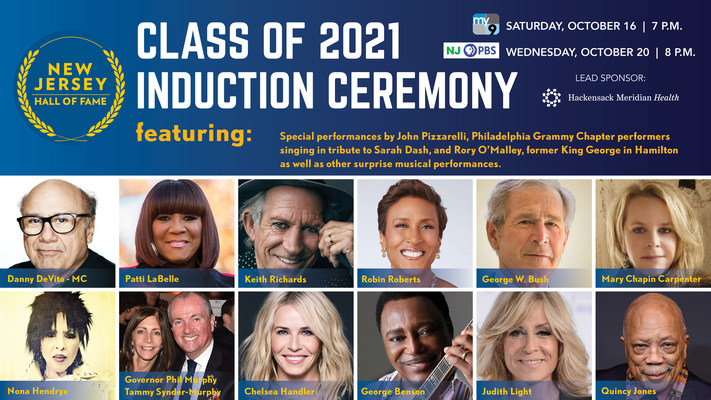 The ceremony will also pay tribute to the late Sarah Dash, who passed away on September 20, 2021 before she was to be inducted into the Hall of Fame this year.

And as the nation marked 20 years since the devastating September 11 attacks, the Hall of Fame is proud to announce that this year’s Unsung Heroes are the thousands of first responders who have suffered complications and passed away due to their service.

**Previous inductee, but being formally inducted this year.

The 17 inductees in the five categories were chosen out of 50 nominees after a public vote during the month of May.

ABOUT THE NJHOF: Because everyone needs a hero, the New Jersey Hall of Fame (NJHOF) honors citizens who have made invaluable contributions to society, the State of New Jersey and the world beyond. Since 2008, the NJHOF has hosted 12 ceremonies for more than 180 notable individuals and groups in recognition of their induction into the Hall of Fame. The NJHOF endeavors to present school children with significant and impactful role models to show that they can, and should, strive for excellence. The NJHOF is thankful for the support of its many sponsors, like Hackensack Meridian Health, without which none of our endeavors would be possible. For more information, go to www.njhalloffame.org.

Jack in the Box Announces its Starting «Jackletes» Line-Up

Set A Successful And Fashionable Routine This Fall With Casio