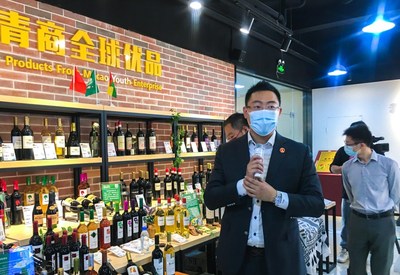 During his days working for the local government and an accounting firm in his hometown of Hong Kong, Lo Yuenlai cherished an entirely different professional dream–to work in the field of technology and innovation. After learning about the possibilities opening up in Shenzhen, Guangdong Province, the young man decided to give it a go.

«Compared with Hong Kong, the mainland features a larger space with diverse industries that can broaden my horizon. That’s what attracted me most,» the 25-year-old told Beijing Review.

He has been working in Shenzhen for almost two years now, at a hi-tech company focusing on machine vision in the Shenzhen-Hong Kong Youth Innovation and Entrepreneur Hub (E Hub) located in Qianhai, just across a bay from Hong Kong Special Administrative Region (SAR).

E Hub-based businesses can enjoy a rent discount and other subsidies from both the Shenzhen government and the hub’s authority, Lo explained. Four years after settling there, BMTek, where Lo works, has gone through a growth spurt. Its staff has grown from a mere seven members to more than 100.

E Hub is part of a plan for advancing the reform and opening up of the Qianhai Shenzhen-Hong Kong Modern Service Industry Cooperation Zone issued by China’s central authorities in early September. The plan expands the area of the Qianhai zone by eight times, from 14.92 square km to 120 square km.

Similarly, a plan for the creation of a Guangdong–Macao in-depth cooperation zone in Hengqin was issued in the same month.

Together, the two plans provide a broader, more convenient and higher-quality environment for residents of the mainland and both SARs to live, invest and work in, said Leung Chun-ying, Vice Chairman of the National Committee of the Chinese People’s Political Consultative Conference, China’s top political advisory body, at an online seminar on September 13.

They also make it easier for enterprises in Hong Kong and Macao to explore the vast array of opportunities on the mainland and beyond, Leung added.

Rather than getting embroiled in competition for resources, Qianhai and Hong Kong will forge a mutually beneficial relationship, Wu Sikang, Director of the Shenzhen Municipal Government’s Development Research Center, said.

Like Qianhai, Hengqin, too, banks on its geographical advantage to promote regional cooperation. The Hengqin Island in Zhuhai is adjacent to Macao, with the closest points between the two no more than 200 meters apart, and is also not far from Hong Kong.

Hengqin covers an area of 106 square km, over three times the size of Macao. The Hengqin plan aims to help Macao cultivate a more diversified economy and leverage its advantages in industries such as health, modern finance, hi-tech, exhibitions, trade, culture and sports.

«Industries and businesses that boost employment are what we want,» said Cong Liang, Vice Chairman of the National Development and Reform Commission, the nation’s top economic regulator.

According to the plan, young professionals from Macao who start their own businesses or are employed in innovative enterprises in Hengqin will be able to enjoy supporting policies from both Macao and Guangdong. Further measures to encourage businesses in the cooperation zone to recruit young talent from the SAR are in the pipeline.

With a population of more than 80 million, the Guangdong-Hong Kong-Macao Greater Bay Area, consisting of two SARs and nine Guangdong cities, covers an area of 56,000 square km, about three times that of the San Francisco Bay Area.

Regional cooperation has made the daily life of residents in the Greater Bay Area more convenient. For example, a new port of entry, with a designed capacity for handling 222,000 daily passenger crossings, has greatly eased travel between Zhuhai and Macao.

Guangdong will continue to improve services for Hong Kong and Macao entrepreneurs, said Lin Keqing, Executive Vice Governor of Guangdong. Also, a range of competitions and internship programs will be launched to help them familiarize with the real world of business on the mainland.